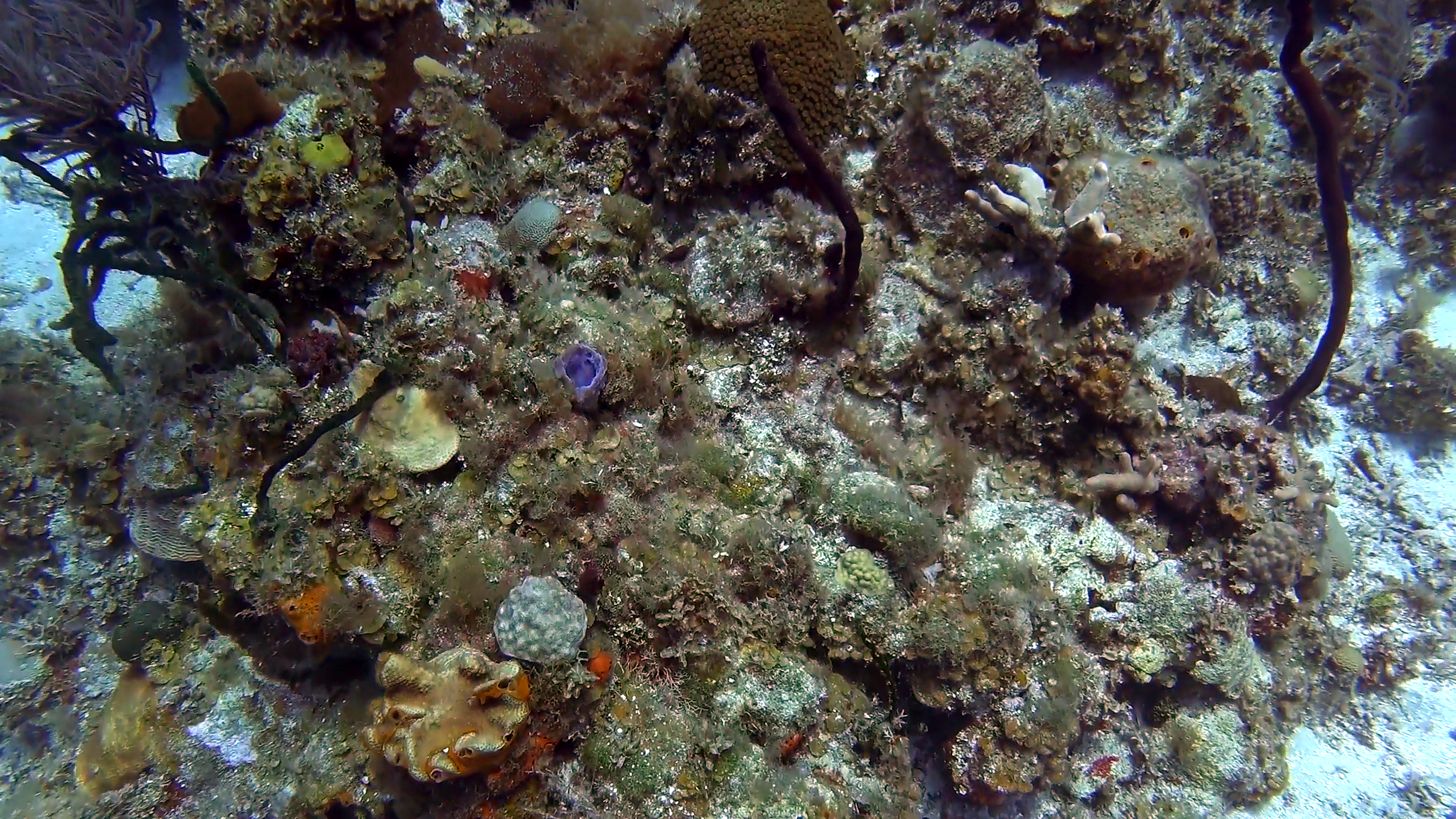 I wouldn’t call myself a photographer or videographer, but I do have an action cam (Sony FDR-X3000), and often document my adventures with it. You can see some of my videos on my YouTube channel if you are so inclined (and I’d be honoured!) – it’s mostly flying, gliding, and SCUBA diving. Basically, adventure for me means leaving the y = 0 plane (“r = c” sphere if you are an engineer).

Unfortunately, I use Linux, and video editing on Linux is an interesting character-building exercise. I have figured out a workflow that works reasonably well for dive videos, so I thought why not share it?

Left: Before. Right: After.

For me, dive videos have 2 main problems:

As mentioned above, the footage was shot with a Sony FDR-X3000, in 4K mode, with underwater white balance, and handheld.

See the left half of the video for what the original footage looked like. As promised, it’s shaky and blue, but with very good clarity (a bit less now that YouTube has re-encoded it).

Unfortunately Linux does not have any of the commercial video editing programs that everyone love, but it does have Kdenlive, which is more than powerful enough for our purposes, and the epic FFmpeg – the command line video editor (+converter/streamer/etc) that can do just about anything under the sun…

Here I am using FFmpeg to solve both The Shake and The Blue, and Kdenlive to do the cutting.

It’s one of those 20 years old UNIX programs that can summon a demon and make you a sandwich if you are well-versed in its 1000 flags and convoluted syntax, but you won’t be able to do anything useful without a solid 20 minutes of RTFMing. Well, I did the RTFMing and summoned the demon!

Most FFmpeg commands consist of input specification, a series of filters (how you want to change the video), and then some encoder settings to write to an output file.

To work out how to add red back into the video, we have to first figure out what the colour distribution looks like in the original. For that, I opened the video in VLC, looked for a frame with as much colour as possible, and took a snapshot. 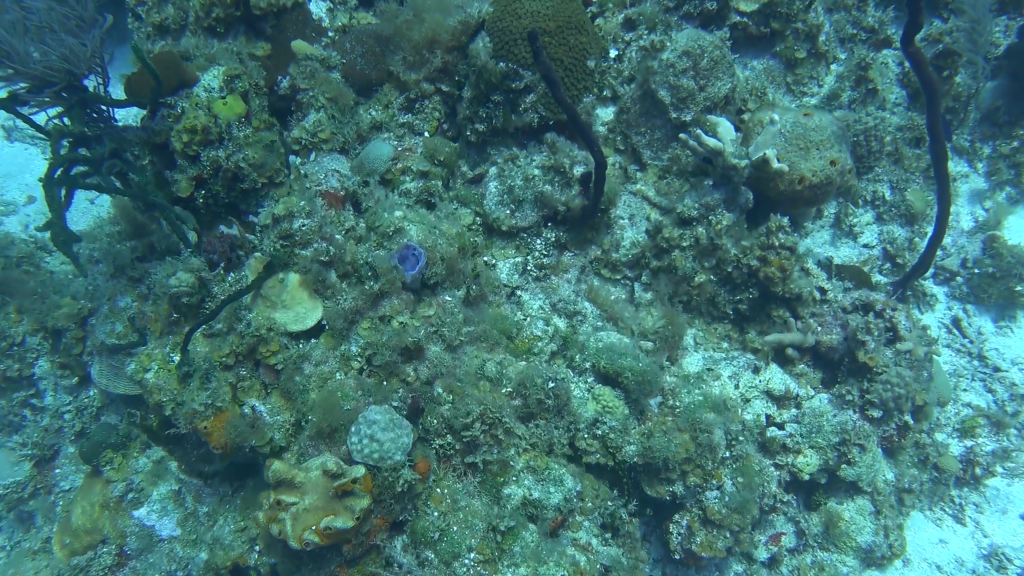 I then opened it up in GIMP, and used the “Colours -> Levels” tool to see what the per-channel histograms look like. 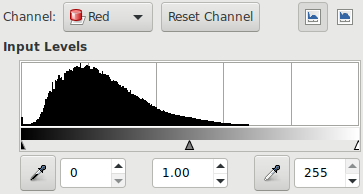 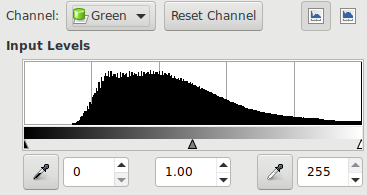 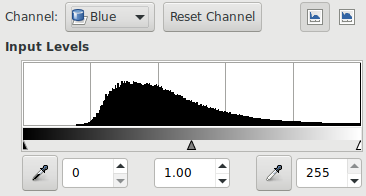 As we had expected, red levels are very low, and that’s what’s giving the image a heavy blue-green tint. Now we can adjust the arrows underneath the diagram to rescale each channel so that they only cover the range actually used to give maximum contrast… or we can just be lazy and click the “Auto” button, which does the same thing!

Auto leveling gave me this: 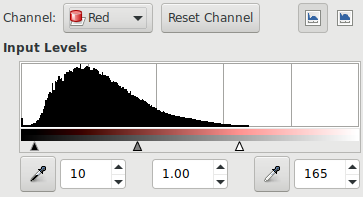 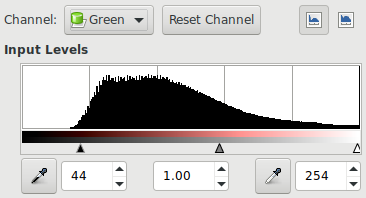 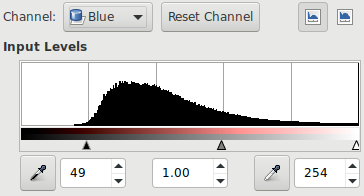 Write down the numbers under each histogram – they are what we came here for.

And now, the image looks much better: 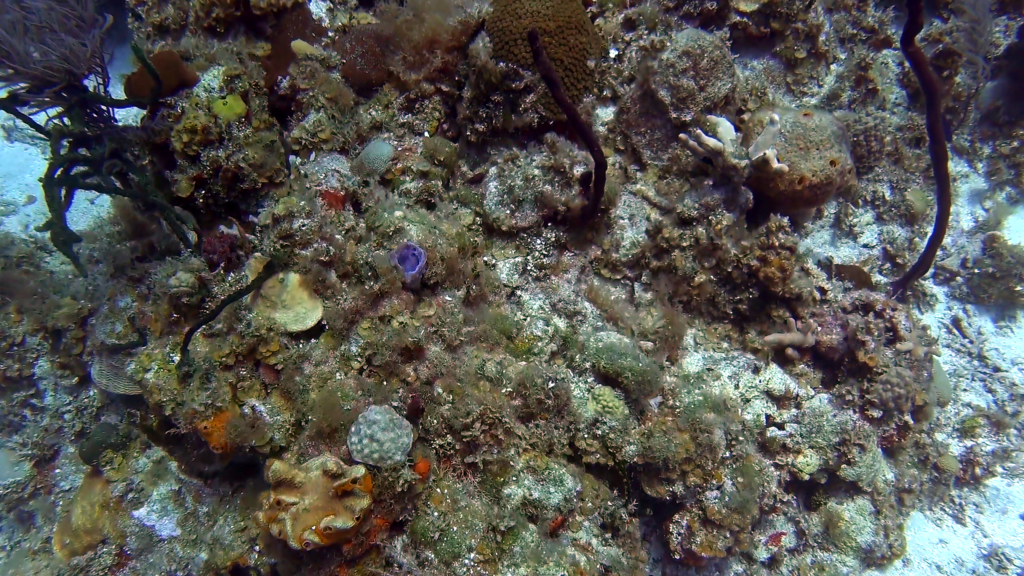 Auto-levelling is great, but still results in loss of resolution in the red channel due to the reduced range, so at least theoretically, adding a physical red filter (which reduces blue and green light, and force the camera’s auto-exposure to increase exposure/gain) should result in better image quality. Will try that next time!

In the case of de-shaking, two passes are needed – first pass analyzes the video and computes motion vectors (basically it tries to figure out how each part of the video is moving frame to frame), and the second pass applies necessary corrections.

I also want to crop out 15% from each edge because I was on wide angle setting, and there’s significant fish-eye distortion near the edges.

This one should be pretty self-explanatory. Take the input, crop it to 7/10 width and 7/10 height, starting from x=1.5/10 width and y = 1.5/10 height, then run the vidstabdetect (video stabilisation detect) filter to estimate motion vectors. The included settings are ones I found work well in this case. They are explained here. There is no output video here. The vidstabdetect filter writes the motion vectors out to a text file specified as a filter parameter.

This is a slooooow process. On my 16-core 2x Xeon E5-2670 machine it was only able to do 3-5 frames per second, so the whole 23 minutes footage took about 3 hours. The filter is not GPU-accelerated, and this is exactly the sort of thing a GPU would do very well.

In the second pass, we use the sibling filter vidstabtransform to actually transform the video using the motion vectors computed in the first pass. I also added the “unsharp” filter as recommended by the vidstab author because I’m a good boy. This is also where we apply the colour level correction using the numbers we got from GIMP earlier. Each channel has a minimum and a maximum to scale from. Use the numbers from GIMP, divided by 255.

This time we do have an output video file – to be encoded using libx264 (very high quality open source library for encoding H.264 videos, which is the industry standard encoding at the moment). At this point we downscale to 1080p. Why shoot in 4K if we are downscaling anyways? Because this allows the stabilising filter to work in 4K. Stabilising requires zooming in so that black pixels won’t be shown on edges when the image is rotated and translated, and that means some pixels will be thrown away. By shooting in 4K, we make sure we still have enough resolution to work with in the end to get a high quality 1080p video.

This took another 5 hours on my machine for the 23 minutes footage.

Just for fun, here is the command I used to produce the “side by side” video above:

It crops the first video in half, scales it to 960×1080, and do the same with the second video, then stack them horizontally. This time I used the NVENC GPU encoder just for fun. Would not recommend it for anything “serious”. It’s very fast and not very high quality. Really only useful if you are doing things like live game streaming where you need to encode into multiple resolutions at the same time with minimal latency and low CPU usage. I would use libx264 for anything serious, though it does take a while if you want a high quality encode and don’t have 16 cores.

I did all the cutting in Kdenlive. I won’t write much about it because it’s a nice and simple GUI program, and I figured it out without even reading the manual!

As you can see in the side-by-side comparison, the result is much better than the original, but stabilisation is still not perfect. There’s quite a bit of distortion going on still. I believe it’s because vidstab only looks for 2D affine transformations, and there’s parallax error not being accounted for. It would probably have to be projected into 3D to fix that, which is probably too slow to run on a CPU. Hey, I’ve always wanted to do some GPU programming…

Disclosure: JLCPCB sponsors some of my projects, but I would never recommend something that I wouldn’t otherwise. Their SMT Assembly service I believe is unique in the industry, and is great for hobbyists who need high quality assembled prototypes for cheap, without having to deal with logistics of component supply. … 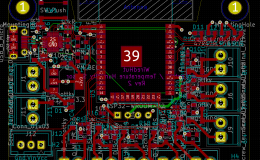 In this post I am going to do a deep dive into the electronics design for my simulated sunrise/sunset aquarium light project. If you have not read that post, I recommend starting with that. Disclosure: JLCPCB is sponsoring my projects, but I had already been a big fan of their …

Why? Silicone can be used to make all sorts of things, but perhaps the most popular application is sex toys. There are huge variations in personal preferences, and if you are designing your own, you can make it exactly how you like it. Have a really good toy that’s just …